London Eye and in the sky: Continental Truck Tires work in the strangest places 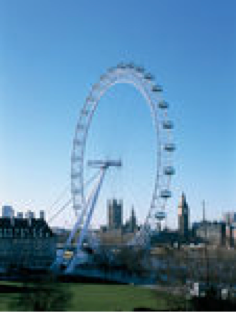 Continental Tires find work in the strangest of places, the company says, with today’s Continental tires reaching new heights as they help operate some of the world’s most inventive engineering projects.
In London, a familiar sight for both residents and visitors alike is the world-famous EDF Energy London Eye. This tallest cantilevered observation wheel in the world allows passengers to enjoy the sights of London from fully enclosed capsules, suspended on a 1,322-ton rotating wheel which hangs over the River Thames. There are 32 capsules, each with its own climate control and stability system, and the London Eye stands 442 feet (135 meters) tall.

The drive systems of the London Eye are located in two towers, one at each end of the wheel’s boarding platform. But what riders of the London Eye don’t realize is that the rotation of the wheel depends on Continental truck tires. The tires, Continental HSRs (Heavy Steer Regional truck tires from the Commercial Vehicle Tire business unit), act as friction rollers along the rim of the wheel. The tires are each turned by hydraulic motors, and the rotation of the tires turns the entire wheel structure to provide the rotating view of the London skyline, said Mark Robinson, head of technical operations for the EDF Energy London Eye.

“Continental truck tires were chosen for the turning mechanism of the EDF Energy London Eye, because of their durability and reliability,” Robinson said. “The Continental HSRs have to rotate along the rim of the London Eye throughout the hours of operation, and it’s imperative that there be no down time and that they be low maintenance. We have had no issues with the Continental tires and they have proven to be reliable, helping us provide spectacular views of London to millions of visitors since we opened in 2000,” said Robinson.

The KAMAG transporters each use 72 Continental HTR truck tires to move payloads from the processing facilities to the launch pad. The combined weight of the launch vehicles and payloads can be up to 100 tons. The Atlas V and Delta IV launch vehicles carried by the KAMAGs have launched high-profile missions including NASA’s ‘Curiosity’ Mars rover, Global Positioning System (GPS) satellites and other critical national security payloads.

Specified by KAMAG for use with its self-propelled modular transporter platforms, the Continental HTR (Heavy Trailer Regional) tires were installed in September 2012.