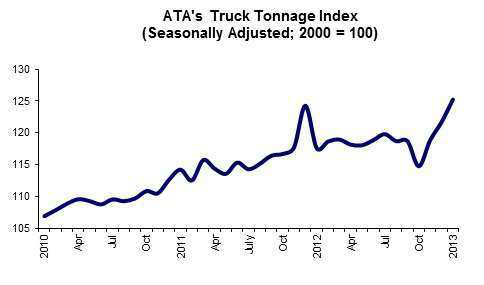 The For-Hire Truck Tonnage Index, produced monthly by the American Trucking Associations, rose 2.9 percent in January, following a 2.4 percent climb in December, to its highest January reading ever and a 6.5 percent year-over-year increase.

The seasonally adjusted index is up 9.1 percent since November and posted its highest January reading since 2008, ATA says. The Index shows steady rise in truck tonnage since 2010, with a 5.8 percent jump in 2011, followed by a 2.3 percent jump last year. The non-seasonally adjusted index — a measure of change in actual tonnage hauled by fleets — rose 10.7 percent from January.

“The trucking industry started 2013 with a bang, reflected in the best January tonnage report in five years,” Costello says. “While I believe that the overall economy will be sluggish in the first quarter, trucking likely benefited in January from an inventory destocking that transpired late last year, thus boosting volumes more than normal early this year as businesses replenish those lean inventories.”