In a short address to the Northeast Ohio National Football Foundation awards banquet held Tuesday, May 7, Pilot Flying J CEO Jimmy Haslam said that the behavior of some of the company’s salespeople cited in a federal affidavit released April 18 “was really sickening” to him, referencing the conversations between Pilot salespeople, other Pilot employees and the undercover FBI informants.

The affidavit includes transcripts of conversations in which Pilot Flying J salespeople discuss ways to allegedly cheat customers out of owed fuel rebates. Haslam is part of some meetings, too, in which the fraudulent scheme was discussed.

“We don’t talk that way. We don’t act that way,” Haslam said. “Candidly, it was behavior that was particularly improper towards customers. It came out Thursday afternoon, I read it Thursday night and was literally almost sick to my stomach, candidly. No. 1 it was embarrassing and No. 2 it’s not how we act.”

Haslam, who is majority owner of the NFL’s Cleveland Browns, said the company’s reputation “has been tarnished,” but that he wants to “rebuild our reputation.”

“It’s a family business as you all know and that’s not how we act and how we do things,” Haslam said. “I’ve been out talking on trucking companies. First of all, apology, secondly, asking for a second chance.”

Haslam then in the speech reiterated the five steps the company announced in late April they’d be taking to try to rectify some of the points of the accusations, like performing an internal audit of all of its contracts, hiring a compliance coordinator, suspending salespeople, ending all “manual calculations” of rebate checks and hiring a “special independent counselor” to perform an internal investigation.

The rest of the speech centered on football and the recent NFL draft.

Click here to see all of CCJ‘s coverage of the Pilot raid, allegations and lawsuits. 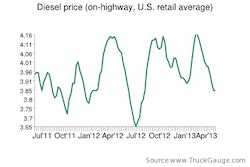