Solving a parts problem: Quality at a low cost

If you want to sell a truck, somebody likely will buy it. The trick is getting that somebody to come back and buy another truck from you once the first one is worn out or their business expands.

The key to pulling off that trick is service. Shrewd manufacturers know that good service – giving customers what they want – is an approach that usually pays dividends and ensures loyalty.

That’s what Isuzu Commercial Trucks North America did when a 2008 study found its dealers were losing market share to aftermarket parts suppliers. It’s common knowledge that dealers make serious profits on their parts business. But the Great Recession and a flood of cheap parts – both in price and quality – had placed a squeeze on customers. Today, fleets still have to save money whenever and wherever they can, and aftermarket parts are a strong temptation.

While there are many heavy-duty fleet managers who would drink shop floor cleaner before buying a cut-rate part, many of Isuzu’s light- and medium-duty customers don’t have dedicated service bays, fleet managers or technicians. Many find themselves suffering downtime due to the failure of second-rate parts such as filters, brake pads, rotors and belts.

It was with these customers and its dealers in mind that Isuzu tried an innovative approach to solving this parts problem. Instead of trying to make the “quality” argument to these already reluctant customers to convince them of the need to pay more for genuine Isuzu parts, it would create and offer a high-quality parts line at a competitive price lower than that of genuine OEM parts. The thinking – according to Shaun Skinner, executive vice president and general manager – was that dealers would be more able to retain customers tempted to go the aftermarket part route while offering them better vehicle reliability and uptime.

In April 2009, Isuzu created its FleetValue brand and launched the first four FleetValue branded parts. While the FleetValue brand since has grown steadily, Skinner says its overriding mission remains unchanged: Provide an alternative lower-cost maintenance part and reduce the overall cost of ownership to Isuzu’s customers.

Skinner says FleetValue service parts must adhere to the same rigorous testing standards and criteria as their OEM counterparts – or, in some cases, improve on the quality – while offering a price-competitive low cost to the customer. These high OEM standards that continually must be achieved put a tremendous amount of pressure on all candidate FleetValue branded parts, along with a new level of high standards that both dealerships and customers now expect as exceeding the capabilities of aftermarket alternatives.

The concept has worked well, Skinner says, and Isuzu is adding more FleetValue parts to its portfolio, with a goal of offering customers more than 200 parts by yearend. Moreover, Skinner says, Isuzu now feels that the FleetValue concept is proven and will be an important element of the company’s customer support efforts in North America. Giving the customers lower-priced parts and more vehicle uptime is a winning combination to any manufacturer, dealer or fleet owner. 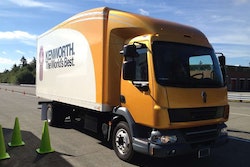