Watching the nation’s roadways these days, it’s obvious that a growing number of tractor-trailers now have aerodynamic devices to help control fuel costs.

The science of aerodynamics isn’t new, but given the boost in commercial vehicle efficiency it delivers, it’s surprising it’s taken this long for the trucking industry to embrace it more fully. Even more surprising is that there remain aerodynamic holdouts – fleets and drivers who dislike the devices because they don’t look “traditional.”

“It’s a totally different world than we saw back in 2006 and 2007,” says Jeff Grossmann, vice president of engineering for ATDynamics. “It is understood in our industry today that the most competitive and profitable fleets are the ones that are adopting aerodynamic technologies ahead of their competitors.”

Grossmann says that understanding by fleets only is going to deepen next year as the results of the U.S. Department of Energy’s SuperTruck Program come to light. The goal was to boost commercial vehicle fuel economy to twice the baseline number established in 2010 when the project started.

“We’re already seeing releases stating that number is going to be met,” he says. “Aerodynamic devices have played a huge role in hitting that number.”

The verdict may be in on aerodynamic devices, but fleets thinking about adding them to their vehicles need to have realistic expectations on the type of fuel economy numbers they’re likely to see. Fuel efficiency percentage boosts based on device combinations are not cumulative. To understand the actual increases provided by adding a number of different aerodynamic devices, a fleet has to look at the tractor and trailer as a total system.

“Each piece that is added will have an effect on the total system,” says James Scarcelli, vice president and general manager for Wabash Composites, a division of Wabash National. If a gap reducer is added to a system that already has a skirt, the aerodynamic change also will affect the aerodynamics around the skirt.

“In most cases, you are dealing with the law of diminishing returns – the more you add, the less each part can contribute to the total system,” Scarcelli says. “You cannot take a 4 percent device and a 6 percent device and call it a 10 percent gain.” To measure the gains of combined devices accurately, the configuration should be tested in a wind tunnel, at a track or on the road, he says.

Another problem with calculating fuel savings accurately is understanding the maddening array of variables that come into play. Wind, weather, temperature, road surface and terrain are just a few of the conditions trucks encounter that can reset the aerodynamic calculator on a daily basis.

For many fleets, it may be more accurate to measure aerodynamic efficiency gains in miles per gallon instead of drag percentages. “Air drag is a force that drains an amount of certain power from the vehicle’s engine,” says Natalie Melomed, senior business analyst for VorBlades. Air drag depends on the vehicle’s shape and size, speed and weather conditions, Melomed says; it does not depend on load weight, tire style or type of engine or transmission.

Melomed cites an example of an empty truck with no aerodynamic devices fitted. “Let’s say, right out of the box, that truck is getting 8.5 miles per gallon,” she says. “Now let’s say after installing VorBlades aerodynamic devices, the vehicle mpg number increased to 8.8 mpg. But now add a payload of 45,000 pounds, and that number drops to 7.5 mpg without the device and 7.8 mpg with the VorBlades.”

Although the vehicle’s overall drag was reduced, the powertrain has to work harder to move the heavier gross vehicle weight, Melomed says. The 0.3 mpg increase remains the same in both unloaded and loaded configurations, but because the same force to overcome air drag is needed, the percentage of fuel savings is changed.

Grossmann says using mpg is an excellent way to talk to drivers about the benefits of aerodynamic devices. Another formula ATDynamics uses is gallons saved per 1,000 miles driven. “This is a pretty simple calculation and often the easiest for fleets to make,” he says.

Aerodynamics is not just for long-haul trucks, either. “I hear fleets tell me all the time they rarely run over 55 mph, so aerodynamic devices won’t help – this is not the case,” says Scarcelli, citing research that shows aerodynamic drag contributes to about 25 percent of the fuel consumption during an urban drive cycle versus 50 percent for long haul.

“The ROI period will be longer for the urban cycles, but there is still a benefit,” he says. 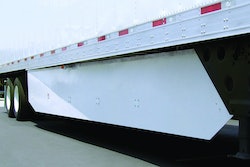 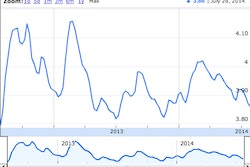