The amount of freight carried to and from the United States and its North American Free Trade Agreement partners Canada and Mexico exceeded the $100 billion mark in October for the first time, reaching $103.1 billion, according to the Department of Transportation’s Bureau of Transportation Statistics.

Of that, trucks carried nearly 60 percent, moving $61.4 billion goods between the U.S. and its neighbors. Surface trade as a whole, which includes truck, rail and pipeline, accounted for $85.4 billion.

October’s total trade figure grew from October of 2012 by 4.5 percent and topped September’s $94.4 billion by 10 percent.

Truck trade, too, bested its previous record of $60 billion, which was from October 2012, representing a year over year increase of 3.1 percent.

In trading with Canada, trucks carried 53.5 percent of the $56.7 billion of freight moved between the two countries. Rail carried the second most, 16.5 percent. 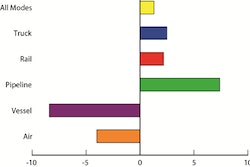 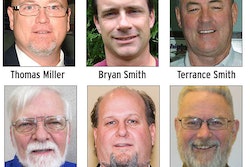