The new station supports the region’s quest to be the transportation, logistics and natural gas hub of the Southeast. It also supports the Global Cities Initiative to increase exports.

The new station, which uses a public access card reader, includes two dual hose dispensers, enabling two semitrailers to fuel at the same time. This station marks an important milestone in host Champion Brands’ mission to replace its entire fleet of trucks to CNG by July 2017. 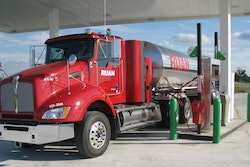