The Bureau of Labor Statistics released the preliminary results of fatal occupational injuries in 2014 last week. Occupations in transportation and material moving made up the largest share (28 percent) of fatal injuries of any occupation, the report notes.

According to the BLS, fatal work injuries in the transportation/material movement group rose 3 percent to 1,289 fatalities in 2014, the highest total since 2008. 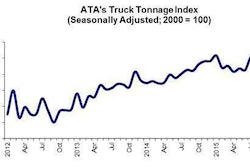