The firm recorded 146 cargo and trucking vehicle thefts, 107 of which were cargo thefts, during Thanksgiving week from 2012 to 2015. CargoNet’s data indicates 80 trucks and 103 trailers were stolen during those weeks, with an estimated loss value at $8.2 million. Each theft was worth an average of $147,060.

Food and beverage items accounted for 31 of the 107 reported cargo thefts. Thefts of electronics, metals and clothing followed with 12, 11 and 10 reported thefts, respectively.

During the four-year period, Texas was the most-targeted state with 35 thefts, almost double the amount of the next highest state. California logged 20 thefts during the period, followed by Florida with 18, Georgia with 12 and New Jersey with 7.

• Make sure to have accurate license plate, VIN and descriptive information for tractors, trailers, containers and container chassis for police in the event of a theft.
• Secure all trailers, loaded and unloaded, with high-security barrier seals along with hardened padlocks.
• Secure all tractors with high-security locking devices such as air-cuff and steering column locks.
• Arrive at pick-up and delivery locations well-rested, showered, fed and with a full tank of fuel.
• Avoid leaving loaded trailers unattended. 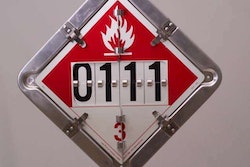