Kevin Burch, co-chairman of TMAF, president of Jet Express and chairman of American Trucking Associations, said TMAF now has more than 3,000 members in its database supporting the movement to educate legislators and the motoring public about the positive impact of the trucking industry.

“Since our last public update this past spring, we’ve hit new, positive milestones on so many fronts – from expanding our reach with a member database topping 3,000, building our donor base and further engaging with lawmakers, the industry, the media and the public,” Burch said. “Our progress is a testament to all that our donors and supporters have done throughout the year, signaling a bright future ahead for TMAF.”

TMAF raised $1.2 million in donations in 2016, as well as between $3 million and $5 million in what Burch called “in-kind” services, such as advertising space.

“It’s surprising how many people are doing things in-kind,” Burch said. “This is a movement starting to pick up. We’re excited because six months into this, we were challenged that we wouldn’t be around after the first year. Now we’re entering year three.”

One of the programs TMAF has used to raise money is its trailer wraps program, which serve as moving billboards going down the highway. To date, the group has sold more than 140 wraps and has a goal to get 200 of them on the road.

Burch also announced TMAF’s plans to add more options to the type of wraps available. The group will be adding 3D wraps, along with bottom rail wraps that will be more cost effective, Burch said. He added the 3D wraps are still in the drawing stage, but said they would project off the trailers. The bottom rail wraps will go around the lower 36-48 inches of the trailer.

“This is a cheaper option that will still get our message out,” Burch said. “They will be almost eye level, extending up about 36 inches from the rivets on the bottom of the trailers.”

“Whether through our ‘#ThankATruckDriver’ call-to-action during National Truck Driver Appreciation Week – which generated more than 800 Facebook shares – or our latest round of videos that highlighted the essentiality of our industry by capturing opinions of industry professionals at MATS, GATS, and NTDC, we’ve seen yet again that trucking is a very active and proud group of professionals, friends and family,” Hamilton said. 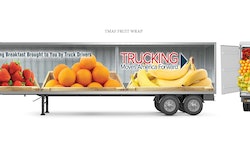 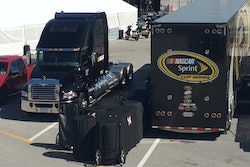