Inland Kenworth was one of five finalists for the fifth annual award, which this year was sponsored by Automann and Premium 2000. The other finalists were CIT Trucks, Peach State Truck Center, Four Star Freightliner and Doggett Freightliner.

“It’s nice anytime that you are recognized for the invested teamwork that goes into making a dealership or branch successful,” says Inland Kenworth New Truck Sales Manager Don Blake.

“We do a great deal with our community and to help our customers but we don’t do it to win awards. But, it is very nice anytime that other people see what our team is doing.”

That platform has allowed them to use their reach to benefit more than just their truck sales customers.

In 2016-2017, Blake spearheaded an effort to raise money to fight a growing epidemic in America. After hearing a presentation given by Truckers Against Trafficking, an organization that fights human trafficking at truck stops, Blake approached Inland’s President, Bill Currie, with a request for $12,000 and the idea to build a special themed truck that would later be auctioned to raise money for the organization.

“We raised $89,000 in direct sponsorship and roughly $35,000 in in-kind sponsorship,” Blake says. “The ‘Everyday Heroes’ truck is making a lasting impact, much more so than we could have ever imagined. It’s gratifying to pull so many people together for a cause and to fight something so awful as human trafficking. Many people have worked to make this possible and it’s just unreal.”

As time passed, Blake says the project pulled more and more time and resources, but at the end of the day, it was certainly worthwhile.

“It’s incredible when you see the final product and to know that money will be used in the way that it’s going to be used,” he says. “It was a very labor-intensive project, but we are very proud of the end result.”

According to Truckers Against Trafficking Executive Director Kendis Paris, human trafficking is an industry that is estimated to be worth $32 billion in the United States alone—$150 billion globally.

“This money will enable us to continue to expand our work within the trucking industry, and also allow us to further our partnerships with law enforcement, additional modes of transportation, and multiple countries, in the fight against human trafficking,” Paris says. “Inland Kenworth’s Don Blake led the charge to the very end.”

The company has also long worked hard for its customers as well, providing training to both its own staff and to customers alike.

“Training customers in the latest Kenworth parts programs is extremely helpful to our customers and has dramatically increased our sales,” says Parts Manager Vic Stiller.

Last year, Stiller and his team trained more than 80 customers to use ECAT—a program that lets customers look up every nut and bolt on a truck and OPC—Kenworth’s Online Parts Counter. OPC allows customers to log in and see what parts are in stock, what the price is and order them with just a click.

Additionally, the truck sales staff is well-trained by Kenworth.

“Our customers expect us to be the experts and bring them solutions to their individual needs, so we invite a vendor to present at almost every sales meeting,” Blake says.

Inland is heavily invested in the continuing education of its service department. The company has spent more than $53,000 in shop training this year.

The company has also invested in becoming more energy efficient and eco-friendly throughout its facilities.

“Our roof-mounted solar system was designed to provide 100 percent of the energy needed by the building during the summer. On most days, we are selling energy back to the power company. It was also designed for future expansion and the ability to add battery storage as batteries improve,” according to Tom Willcox, who heads the company’s marketing efforts.

“We have energy-efficient LED lighting throughout the entire building. It is even installed outside around the entire lot. We put two layers of insulation in key areas of the building—including the offices. All the windows are energy-efficient dual pane. For the shop, we mounted a swamp cooler and then we mounted fans inside the bays to pull down and circulate the cooler air. These design improvements are very important as the temperatures in the summer can reach 120 degrees.

“Our building was designed to make recycling easy rather than a chore. The shop has a small bin inside and a larger metal bin just outside. Each office has small recycling bins for paper and plastic. The cardboard crusher was placed just outside the warehouse.”

The company also prides itself in its marketing efforts, which often includes customer events.

“We love customer events,” Willcox says. “This year, we held a sporting clay shootout and gave away shotguns to first, second and third place winners. We had more than 80 customers in attendance and they loved it. We also host a NASCAR event each November. It has grown in the last couple years so we now rent an RV on the infield and host about 90 people.

“We also like to try new and forward-thinking marketing ideas. We teamed up with the Utility Trailer dealer down the street to advertise truck and trailer combos on TruckPaper. While we have not sold a combo yet, we have found that because the cost of the truck and trailer combo is higher than either unit alone, our combo ads appear first on the listings.”

And lately, that news has been good. They can now share their story as the 2017 Successful Dealer of the Year. 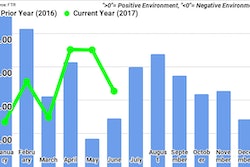