Continuing its development of advanced driver assistance systems, Wabco announced the future availability of OnLaneAssist, a system that builds on its camera-based OnLane lane departure warning system to provide automated steering corrections to keep the vehicle in its designated lane.

The system is capable of distinguishing between accidental lane drifting and an intentional lane change. If OnLane detects a drift, OnLaneAssist intervenes before the vehicle reaches the lane boundary, autonomously applying corrective torque to the steering wheel to return the vehicle to the center of the lane.

“We have for the first time in this country connected the power of controlled braking systems with active steering and are demonstrating how important it is as a technology on the path towards autonomous driving,” said Jacques Esculier, Wabco’s chairman and CEO, during a press conference at the North American Commercial Vehicle Show in Atlanta.

“The braking system is the backbone of vehicle dynamics control on the longitudinal access,” said Esculier. “Active steering gives us access to lateral control capabilities and provides full control of vehicle dynamics, and that is the major differentiator we are building around the acquisition of Sheppard.”

Wabco also announced its OnGuardPlatoon that combines the company’s OnGuardActive’s adaptive cruise control and active braking features with vehicle-to-vehicle (V2V) connectivity to link two or more trucks into a platoon.

Wabco also announced it soon will release OnGuardMax, an extension of OnGuardActive that allows active braking at highway speed on stationary objects using both camera and radar technologies, as well as adaptive cruise control (ACC) in stop-and-go traffic conditions.

“This is supporting our ambition to grow as the leader in our space in this part of the world,” said Esculier of the Meritor JV and Sheppard acquisitions.

The Sheppard purchase comes on the heels of the 2016 acquisitions of Laydon Composites, a Canadian aerodynamic device company, as well as Mico, a manufacturer of hydraulic components and brake systems for off-highway applications. 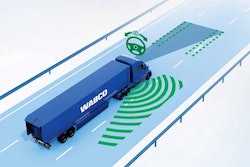 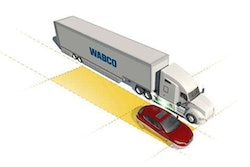 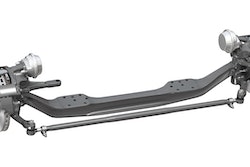