Nikola Motor Company elects to manufacture its trucks in Arizona

Jason Cannon, CCJ chief editor
Jan 30, 2018
Trevor Milton spoke with CCJ in his office following the unveiling of Nikola One in 2015.

Nikola Motor Company announced Monday that Buckeye, Ariz., will serve as the production headquarters for its hydrogen-electric semi-truck. Milton says the company already has more than 8,000 of the tractors on pre-order.

Selected following a 12-month-long process that spanned nine states and 30 site locations, the 500 acre site on the west side of Phoenix will be home to a one million square foot facility.

Nikola Motor Company CEO Trevor Milton says his upstart truck manufacturing company was drawn to the state thanks in part to its labor force and Arizona Governor Doug Ducey himself, “a governor that was an entrepreneur himself,” Milton says. Ducey was previously the CEO and partner in the Cold Stone Creamery chain.

“This incredible new technology will revolutionize transportation, and we’re very proud it will be engineered right here in Arizona,” Ducey says.

Milton plans to begin begin transferring the company’s research and development division and headquarters from Utah to Arizona immediately, adding he hopes to have the transition complete by October.

Assembly of Nikola’s initial run of tractors will be handled by the Byrdstown, Tenn.-based Fitzgerald Gliders group.

“We have already begun planning the construction for our new zero emission manufacturing facility in Buckeye, which we expect to have underway by the end of 2019,” Milton adds, noting the site will be located at Sun Valley Parkway and the future Wintersburg Parkway, where a a new planned community is also being developed.

“As the seventh fastest growing city in the country, Nikola Motor Company is a huge asset which will help us achieve our goal of providing a place where Buckeye residents can live, work and play,” says City of Buckeye Mayor Jackie Meck. 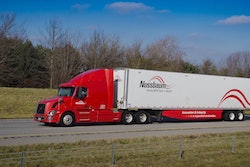 20 fleets recognized as 2018 Best Fleets to Drive For