As part of the SmartDrive program, Oakley Transport uses numerical values to assess risk. The values, SmartDrive Safety Scores, represent the observed rate of risk for every driver based on 80 individual behaviors that include speeding, following distance, texting while driving, seatbelt compliance, aggressive maneuvers, and more.

The scores are normalized by hours and miles driven. The higher the SmartDrive Safety Scores, the higher the risk of collision.

The scores are visible through the SmartIQ web portal. With this automated risk scoring system, Oakley Transport created a monthly cash performance incentive that it announced on March 1 to drivers by sending a message through the Omnitracs IVG system.

Drivers who have an average safety score of between 99 and 50 qualify to receive an extra $0.03 per mile. Drivers that score between 49 and 0 will earn an extra $0.05 for all miles traveled in a month.

Oakley Transport’s base pay is between $0.50 and $0.55 per mile depending on a drivers’ previous work experience. Drivers get annual raises for tenure. A driver earning $0.60 per mile, for example, will earn between $80,000 and $100,000 a year, if not more, says Craig Stevens, vice president of operations and strategic initiatives.

Based on driver scores for the first seven months using SmartDrive, Ty Sherman, chief financial officer, anticipates 75 percent of drivers qualify for the $0.03 or $0.05 per-mile bonus.

Thomas Oakley is tossing around ideas to offer annual prizes for drivers with the lowest SmartDrive Safety Scores. He considered giving the top winner a new pickup truck, but this idea has evolved.

“I would not mind giving three to five $20,000 cash bonuses to spread it out so that one guy is not getting all of this,” he says. “I want everybody to win.”

Sherman and Oakley anticipate the new incentive program will be paid for with gains in fuel efficiency and reductions in insurance and claims costs as drivers lower their scores.

“Fuel mileage will start creeping up as drivers change habits,” Oakley says. “We want to make our good guys better.”

“Since we pay for more of our accident costs, we will see a direct payback for safe driving and coaching drivers,” Sherman says. “The payback will be almost immediate if we do not have those claims.” 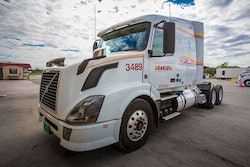 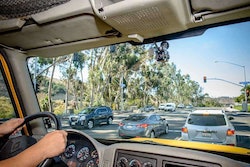