Flatbed in the month jumped 9 cents to an all-time high (according to Truckstop.com’s records) of $2.66 a mile. That’s up 44 cents from the same month last year, and 60 cents a mile from April 2016.

Reefer’s monthly average climbed 23 cents, to $2.71 a mile. Other than January’s $2.80 a mile average, April’s rate was the highest since Truckstop.com began reporting monthly averages. April’s reefer average was up 69 cents from April 2017.

Van rates also jumped 9 cents in April from March, to $2.49 a mile. That monthly average is second only to January’s $2.54 a mile in Truckstop.com’s records. Van’s April average was up 61 cents from the same month last year. 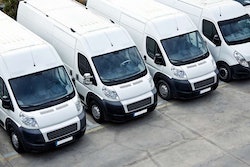