Anheuser-Busch, the largest beer manufacturer in the U.S., has placed an order for up to 800 hydrogen-electric tractors, Nikola Motor Company announced Thursday.

“Both solutions (hydrogen and all-electric) can exist but we see them in different roles,” says Ingrid De Ryck, Anheuser-Busch vice president of sustainability and procurement.

With a maximum range of 1,200 miles and a fill-time of 20 minutes, De Ryck says Anheuser-Busch plans to use the Nikola trucks on long-haul routes. In contrast, plans call for the Budweiser fleet of Tesla Semis to shuttle shipments to wholesalers within 150 to 200 miles of the company’s breweries.

Nikola CEO Trevor Milton says the first pre-production tractors will hit the road for testing with Anheuser-Busch later this year.

Once fully implemented, the 800 Nikola trucks are expected to reduce the brewer’s carbon emissions from logistics by more than 18 percent  – the equivalent of taking more than 13,000 passenger vehicles off the road.

The Anheuser-Busch dedicated fleet is comprised of 750-900 trucks – about one-third of its entire U.S. distribution network, which collectively hauls 12.5 billion cans of beer annually.

As part of the deal with Anheuser-Busch, Nikola plans to develop 28 hydrogen fueling stations along the brewer’s most heavily trafficked lanes. At those stations, which will be open to the public, Nikola says it will process its own hydrogen fuel with on-site solar and wind power, or by buying electricity generated through renewable sources like hydropower.

“By 2028, we anticipate having over 700 hydrogen stations across the USA and Canada,” Milton says. “[A network] very similar to what you would see from a Love’s Travel Stop … only owned by Nikola.”

Under the terms of the full-service lease, Ryder will provide the service and warranty work on behalf of Nikola and will handle all the logistics around truck maintenance including parts procurement for Anheuser-Busch.

Much of the assembly work for the order will be handled by Crossville, Tenn.-based Fitzgerald. 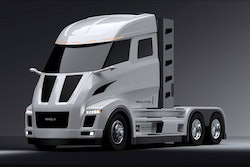 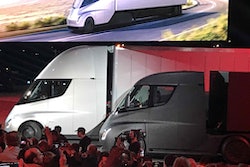