The time has expired for legal appeals to save the California Air Resources Board’s 2014-introduced “compliance alternatives” to the engine upgrades and retrofits required by its Statewide Truck and Bus Regulation. Emails attempting to clarify the situation have been going out this month to truck owners with CARB-registered vehicles still taking advantage of one or more of those alternatives this year. The compliance alternatives were mostly aimed at small carriers, an attempt to aid those who said they didn’t have the resources to upgrade their equipment or retrotfit their existing equipment.

Elizabeth White, CARB’s lead public information officer on the issue, verified the accuracy of the emails’ text obtained by CCJ sister site Overdrive, which details the sunset of five still-in-use compliance alternatives at a date unspecified but described as the “effective date” of a January 31 California appeals court ruling:

The Low Use Exemption: Of perhaps most significance to small fleets readers, this exemption had been expanded to allow trucks out of compliance with CARB traveling fewer than 5,000 miles in California per year. That provision will revert to an annual mileage limitation of 1,000 miles allowed in California per year only. Asked whether truckers who might have already crossed the 1,000-mile threshold in calendar year 2018 needed to worry about being out of compliance now that the 5,000-mile exemption limit was voided, White noted CARB would, “to the degree possible,” attempt to account for the period that the 5,000-mile limit was in effect in 2018.

For all of the sunsetting exemptions, the email’s language says truck owners out of compliance with any of the exemptions’ stipulations at the end of the year “must replace, repower, or retrofit the vehicle(s) per the Engine Model Year Schedule of the regulation.”

The current regulation effectively bans 1995 and older engines (requiring upgrade to a 2010-or-later emissions-spec engine), 1996-2006 engines admissible currently only if retrofit with a diesel particulate filter system. Such engines then require upgrades to a 2010 or later engine emission-spec engine starting in 2020. Model year 2007–2009 engines require upgrades to 2010 technology in 2023.

Agricultural Vehicle Mileage Requirements: Expanded mileages for trucks operating in the ag sector will revert to a mileage limitation of 10,000 miles per year, from current-year limitations of 15,000 miles. As CARB notes, “vehicles that operated less than 10,000 miles per year can continue to use the [compliance] extension until January 1, 2023.”

NOx Exempt Area Extension: After the effective date of the court ruling, 100 percent of any fleet operating solely in so-called NOx-exempt areas, which were expanded with the 2014 rule amendments, will now require diesel particulate filters if covered under the Truck and Bus rule. NOx-exempt areas will revert back to prior boundaries, too.

Exemptions related to Specialty Agricultural Vehicles will no longer be available for cattle-hauling trucks.

A Heavy Crane Phase-In Option also will no longer be available.

The death of the compliance-flexibility options is the result of a lawsuit filed by John R. Lawson Rock and Oil of Fresno and the California Trucking Association. As reported by CCJ in 2016, when a trial court first ruled in Lawson and CTA’s favor, the plaintiffs argued “the delayed compliance schedule afforded by the amendments effectively punishes owner-operators and fleets who made the effort and spent the money required to comply with the California Air Resources Board’s regulations. The amendments put those who did comply on time with the rule at a competitive disadvantage in the marketplace.”

CARB’s appeal of that decision was decided on a narrow basis in late January of this year, effectively voiding the compliance alternatives on the basis of CARB’s failure to appropriately measure environmental and economic impacts of adopting the alternatives. 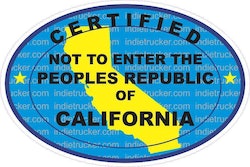