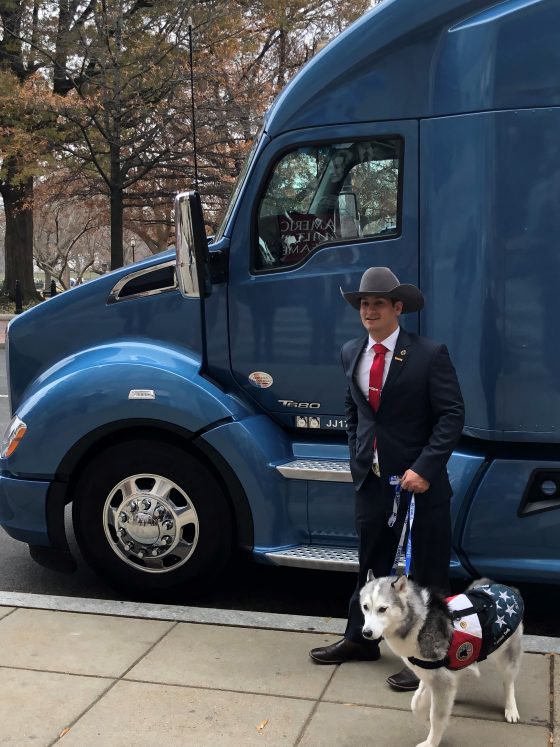 Werner Enterprises driver Quinton Ward’s owner-operator career received a jumpstart last week when he was named the winner of the Transition Trucking: Driving For Excellence Award, which comes with a fully-loaded 2018 Kenworth T680 Advantage.

“It’s just been a whirlwind and I’m so happy to be your finalist and win the truck and drive the Kenworth and showcase what veterans can do out here because we’re out here and we’re here to stay,” Ward said.

Ward served in the U.S. Army as a tank mechanic, instructor and career counselor. He medically retired from the Army in 2010 after being injured while on active duty. After receiving six years of medical treatment, Ward got his CDL with the support of the VA Vocational Rehabilitation Program. He decided to become a truck driver so that he could travel throughout the nation that he had fought to defend.

“I chose trucking because it gives me the ability to drive and see the country I swore an oath to protect and defend,” Ward said. “The skills that are key for success in the military are the same that we as drivers use every day. Time management, communication skills, flexibility and problem solving are the cornerstones that make a great employee and a professional driver. I see my future with the industry growing exponentially. I don’t want to stay and just do one thing. I want to see every facet of this industry.”

Ward was one of four finalists up for the Transition Trucking award. Army veteran and reservist Chris Young, who drives for Stevens Transport, was named the first runner-up and received $10,000. Air Force veteran and U.S. Xpress driver Summar Hanks tied with Mordaunt “Platt” Brabner, a veteran of the Marines and Navy and current TMC Transportation driver, for the second runner-up spot. Hanks and Brabner each received $5,000.

Technology adoption and benefits show continued growth in a year like no other. COVID-19 forced fleets across industries to navigate uncertainty and swiftly adapt to new ways of operating.
DownloadView All