Amazon quietly opened a freight brokerage pilot program late last year, aiming to build out — and lock down — a network of smaller truckload carriers by buying up their time and miles. Whether Amazon has loads to keep them rolling is inconsequential: The company is selling that capacity to other shippers, sometimes at a loss, via the new brokerage platform, according to analysts familiar with Amazon’s system.

In a statement to CCJ, Amazon offered little info on the new system and its intentions, while brushing off assertions that it’s undercutting brokers on rates. “Analysis suggesting dramatic undercutting of pricing is false,” the company said. “We work with many line-haul service providers in our transportation network and have long utilized them to carry loads for Amazon. This service, intended to better utilize our freight network, has been around in various forms for quite some time.”

The tech behemoth, which meteorically rose to the world’s largest online retailer over the past decade and which has served as a major feeder of freight to nearly all segments of the trucking industry since, says the brokerage is a beta program and will initially operate in a five-state area in the northeast — Connecticut, Maryland, New York, New Jersey and Pennsylvania.

Reports last month suggested that Amazon will offer low-margin or even no-margin rates to shippers, therefore allowing shippers to move freight for cheaper than via other brokerages, while still providing carriers access to freight at the rates Amazon already agreed to pay them.

Carson Krieg, co-founder and director of carrier operations at delivery management platform Convey, says Amazon’s goal is to build a network of small carriers, partially as a means to ensure that it has the necessary trucking capacity during peak shipping seasons, such as Halloween, Christmas and Memorial Day. And in gobbling up that capacity, says Krieg, Amazon intends to squeeze its retail competitors by making it harder for them to find the capacity they need to deliver products to stores and to consumers during those peak periods.

Krieg’s Convey works with major shippers that compete with Amazon, such as Walmart, Neiman Marcus and Bed, Bath, and Beyond. “What’s keeping me up at night is the impact it might have on my retail partners,” Krieg says. However, those concerns don’t address the more immediate impact Amazon’s buy-and-sell brokerage could have on traditional brokers, says Krieg. “It’ll have a wave of immediate impact on pricing and margins,” he says. “Amazon consolidating buying power” of truckload services “is the scariest thing.”

Brokerages could be the most impacted, says Krieg, whereas carriers, especially smaller carriers, could be winners, with Amazon hammering out contracts that guarantee rates and loads.

Craig Fuller, CEO of data firm FreightWaves, provided similar analysis of Amazon’s brokerage plan. By establishing a network of carriers, the company can then “offer shippers the ability to buy capacity from their network,” he says, and the company is “selling it off at a discount to the market rate.”

To move its own freight, Amazon needs a “substantial amount of capacity,” says Fuller, noting that their annual spend on truckload freight alone likely reaches upwards of $10 billion. The company has built a fleet of owner-operators and small carriers, intending to “soak up lot of the capacity in the market,” Fuller says.

“But they have to keep those trucks running” during non-peak seasons by “auctioning off that capacity when they don’t need it. They’re selling off capacity they’ve already bought.”

This isn’t a new idea, says Fuller. “Shippers do this all the time,” he notes. The difference, however, is the scale at which Amazon operates and the discounts on truckload services it can offer to other shippers.

“At the end of the day it really impacts the broker,” Fuller says. “What they’re doing is creating an opportunity for  shippers to bypass brokerages and go buy direct at wholesale prices.” This allows shippers to avoid paying the usual 12-18% margin added by brokers, he says. “They’re wiping that out at what looks like no margin or a very small margin.” 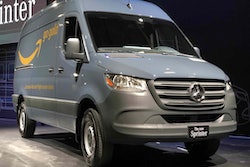