XPO Logistics (No. 6 on the CCJ Top 250) announced earlier this month it is exploring the sale or spin-off of up to four of its business units while holding onto its North American less-than-truckload business.

An XPO spokesperson said the company could end up selling or spinning off between one and four — or none — of its European Supply Chain, European Transportation, North American Transportation, and Supply Chain–North America and Asia Pacific business units. Because it could sell or spin off any or none of these businesses, the company said there “can be no assurance of any specific outcome.”

XPO did emphasize that it doesn’t intend to sell or spin off its North American LTL business, which it acquired from Con-way Freight in 2015.

“XPO believes that LTL as a pure-play company would be well understood by the market and properly valued,” the spokesperson said.

Amit Mehrotra, a financial analyst with Deutsche Bank, said the business units XPO is looking to sell or spin-off are most attractive on paper, adding that XPO likely has a profitable outlook for its LTL business. He said the value XPO can get in a sale or spin-off of these units “is significantly higher than its implied valuation,” essentially boiling down to the sum of its parts are worth more than the value of the whole company today, he added.

“They’ve done a tremendous job [growing the LTL business],” Mehrotra said. “They expanded LTL margins over the last four years by over 10%. The LTL business is also probably the easiest to understand by the U.S. investor base because of comps and clear value drivers.”

Mehrotra added that the company’s LTL operating ratio has fallen from the mid-90s to the mid-80s, meaning for every dollar in revenue collected, XPO is spending around 85 cents.

Research published Jan. 20 by Deutsche Bank notes that potential buyers for the four business units include private equity firms as well as companies looking to grow in those spaces, such as Maersk (the world’s largest shipping company). European logistics companies could also be interested in XPO’s European trucking assets, according to the firm’s research.

Mehrotra said XPO CEO Brad Jacobs’ strategy has always been about “maximizing equity value and doing what was needed to make the most money in a short amount of time,” adding that the decision to potentially sell or spin-off the four business units is in line with that strategy. 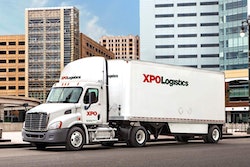 Con-way bought by XPO Logistics for $3 billion, will be rebranded as XPO