Baylor boosts team starting pay to 75 cents per mile
Motor carriers described 2018 as the best freight market in memory, and the weekly announcements CCJ received about driver pay increases reflected their optimism that those conditions would continue.

During 2019 and 2020, news of driver pay increases slowed to a trickle. With the exception of carriers that offered hazard pay and bonuses for drivers who worked during the lockdown of COVID-19 from March through May, announcements of pay increases were few and far between.

Recent indicators, such as those discussed at FTR’s Engage series of online sessions that took place during the week of Sept. 7, show the freight market has recovered with strong retail sales and low inventories, which could trigger a capacity crunch.

One of the benefactors of the current freight market is Baylor Trucking, a family-owned truckload carrier that specializes in expedited dry van and refrigerated shipments. The company has a strong presence in retail and medical shipments.

During 2020, Baylor Trucking has been able to significantly expand its business with longstanding customers in dedicated lanes, and nearly 100% of the loads in its freight network are contracted.

The dedicated freight network enables Baylor to have consistent lanes and home time, according to a news announcement, as well as provide maximum miles by having trailer pools at all shipping and receiving locations for no-touch drop and hook freight.

On Thursday, Baylor announced a 75 cents per mile pay rate for team drivers as the company celebrates its 75th anniversary.

Baylor Trucking is now starting team drivers at $0.75 per mile with a $3,000 minimum weekly guarantee. Additionally, Baylor also has an unlimited referral bonus for drivers that pays 5 cents per mile for every mile that a referred driver runs during the first year.

According to analysis from Baylor, its drivers are currently earning an additional $5,800 to $12,000 in referral bonuses per year.

“As we celebrate our 75th anniversary, we are so proud of our professional drivers for delivering the most essential goods to keep America moving,” said Cari Baylor, president of Baylor Trucking. “The pay increase is a very substantial hike for the trucking industry and is made possible by a dedicated team of professional drivers and office support staff who provide our customers with the highest level of service.”

Baylor serves all 48 contiguous states with primary emphasis throughout the Midwest and Mid-Atlantic regions. The company operates Cummins-powered Paccar products with all Kenworth and Peterbilt tractors equipped with APUs and refrigerators. –Aaron Huff

Another mirrorless camera system gets FMCSA waiver
The Federal Motor Carrier Safety Administration announced this week it is granting a waiver to Robert Bosch LLC and Mekra Lang North America allowing a digital mirror system that replaces the standard rearview mirrors on trucks.

The companies together created Bosch’s Commercial Vehicle Digital Mirror System, which replaces the standard large side mirrors on trucks with two interior monitors and two exterior cameras that are mounted above the cab.

FMCSA says in its decision to grant the waiver that the system “provides CMV drivers with an enhanced field of view when compared to the required rear-vision mirrors” because it eliminates blind spots on both sides of the truck, expands the field of view by an estimated 25% and uses high-definition cameras and monitors with features such as color night vision, low light sensitivity, and light and glare reduction.

First awarded in 2007, the Mike Russell Trucking Image award is given to an individual, motor carrier, trucking organization and industry supplier who each demonstrate “excellence in illustrating the industry’s essentiality, professionalism, and commitment to safety on and off the highways,” according to ATA.

In 2019, ATA recognized Covenant Transport for developing the Tomorrow’s Truckers program; the Minnesota Trucking Association for being one of the leading trucking image supporters at the state level; fleet executive Kevin Burch of Jet Express for developing some of the industry’s high-profile image efforts; and America’s Road Team Captain and YRC Freight truck driver Steve Fields for being the epitome of an American truck driver in his actions, professionalism and words.

Since 2014, the award has been sponsored by HireRight.

Details of the award and how to submit a nomination can be found online. Applications must be submitted by Oct. 5. The winners will be announced Oct. 26 during the ATA’s virtual Management Conference & Exhibition.

Award submissions are evaluated by a panel of judges, and winners are determined based on a number of factors including creativity, frequency, impact and execution. The award is named after former ATA Vice President of Public Affairs Mike Russell, who was a lifelong supporter and advocate for the trucking industry. 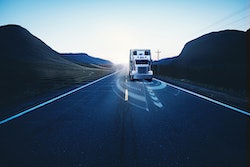