Greg Matheson, contributor
Oct 19, 2021
In the past five years, Lubrizol testing has shown that FA-4 certified lubricants are applicable for use in most engines newer than model-year 2010.

The American Petroleum Institute (API) in 2016 introduced the FA-4 performance category for heavy- duty engine oils, in addition to the more conventional CK-4 category. The split in the category covered low-viscosity lubricants designed for new-model engines that Lubrizol testing has shown that fuel economy gains up to 2% are achievable.

Adoption of FA-4 lubricants to-date remains low. If you’re reading this, it’s more likely than not you’re servicing your trucks with CK-4 lubricants. You probably have reasons for doing so, or perhaps you simply haven’t considered making such a change to your regular maintenance program.

But for today’s commercial trucking fleets, maintaining efficient and competitive operations requires investigating every potential advantage you can find. FA-4 represents a good opportunity for fleets operating a majority of new trucks to seize significant operational benefits, and it’s worth your renewed consideration.

There are more new-model trucks on the road today

When FA-4 was introduced, its applicability to new-model diesel trucks fundamentally limited its potential usage in the short term. But time has passed, and circumstances have changed.

In the past five years, our testing has shown that FA-4 certified lubricants are applicable for use in most engines newer than model-year 2010. And since 2016, an increasing number of newer-than-model-year-2010 engines have proliferated in fleets and across North American highways, including, in all likelihood, yours.

Composition of fleets has been one of the hurdles toward widespread adoption. Being able to service an entire fleet with CK-4 lubricants presents some potential operational efficiencies over servicing certain vehicles with one type of oil and others with another, especially for a fleet with only a few that can be serviced with FA-4. The benefits of selecting FA-4 where applicable may outweigh any potential downsides as older trucks continue to age out of the vehicle population and an increasing number of newer-model vehicles are brought into service.

One source of hesitancy that has revolved around lower-viscosity and FA-4 lubricants is their ability to provide robust engine protection. That hesitancy, however, was and remains misplaced. FA-4 lubricants are subject to all the same performance criteria as their CK-4 counterparts and must demonstrate the same robust protection across various tests as any commercially available lubricant certified by API.

Lubrizol's testing teams have field-tested FA-4 lubricants in real-world engines from a variety of OEMs, and we have generated more than 75 million miles of testing. This includes new models designed to be filled with FA-4 lubricants, and older-model trucks where FA-4 is not specified by the manufacturer. Our findings have been clear and consistent: Old and new engines are demonstrating expected levels of wear at up to 500,000 miles of service while demonstrating significant fuel economy improvement. This means that fleets can rely on modern FA-4 formulations (wherever applicable) to deliver robust engine protection and keep your trucks on the road.

FA-4 lubricants represent a significant opportunity for fleets to operate more profitably and efficiently. Forgoing that choice if your trucks can be serviced with FA-4 may mean you’re sacrificing a potential competitive advantage.

Consider that fuel costs represent about 24% of the average fleet’s cost per mile, according to the ATRI Trucking Review. According to Trucking Efficiency Confidence Report: Low-Viscosity Engine Lubricants, a joint report from the North American Council for Freight Efficiency and Carbon War Room, lower- viscosity lubricants can help reduce your fuel costs. The benefits are clear: “Class 8 over-the-road fleets can realistically expect fuel savings in the range of 0.5% to 1.5% by switching from 15W-40 to 5W/10W-30 engine oil.”

FA-4 lubricants provide even greater benefits when used in the appropriate engine. “The savings from switching to the fuel-efficient FA-4 variant … can be expected to add a further 0.4% to 0.7% of increased fuel efficiency.”

Throughout the lifetime of your vehicles, which may see more than a million miles of on-road service, FA-4 has the potential to deliver some dramatic fuel cost savings here. Projected across an entire fleet, those numbers will provide substantial cost savings that can increase your overall profitability.

If it’s been a while since you’ve thought about how your choice of engine oil may be able to benefit your operation, there’s no time like the present to reconsider. For more information about FA-4 availability and why it might make sense for your fleet, reach out to your lubricant supplier to discuss the value FA-4 could bring your fleet operation.

Greg Matheson is a Commercial Lubricants Product Manager for the Lubrizol Corporation. Since joining Lubrizol in 2015, Greg has worked as an OEM Account Manager, managing Lubrizol’s business with the heavy-duty truck and engine builder OEMs in North America.  In his current role, Greg is responsible for a wide variety of API CK-4 and FA-4 additive products in North America and globally for Lubrizol. Before coming to work at Lubrizol, Greg spent close to 10 years in the trucking industry working for Travel Centers of America. 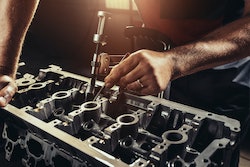