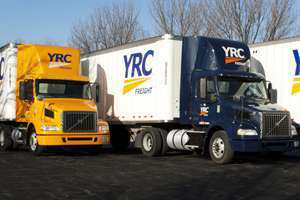 YRC Worldwide Inc. on Friday, Aug. 3, announced that consolidated operating revenue for the second quarter of 2012 was $1.251 billion, just 0.5 percent under 2011, and consolidated operating income was $15.5 million, which included a $6.5 million gain on asset disposals. The company said this is the first time since the third quarter of 2008 that the company has reported income from operations, excluding the second quarter of 2010, which included an $83 million noncash reduction to its equity-based compensation expense.

As a comparison, the company reported consolidated operating revenue of $1.257 billion for the second quarter of 2011 and a consolidated operating loss of $5.6 million, which included a $7.3 million gain on asset disposals. The Overland Park, Kan.-based less-than-truckload carrier lost $22.1 million compared with a $41.3 million loss. The company reported, on a non-GAAP basis, adjusted EBITDA of $70.1 million, a $5.6 million improvement over the $64.5 million adjusted EBITDA.

“Our focused approach to pricing discipline, customer mix management and cost initiatives has driven year-over-year improvement in our business, which is reflected in our operating income,” said James Welch, chief executive officer. “We are producing results slightly ahead of our forecast, despite the recently softening economy, and remain focused on executing our operations and sales strategies at all operating companies.”