With all the choices in end- and side-dump trailers for materials-moving operations, determining the right type for your operation is no simple matter. 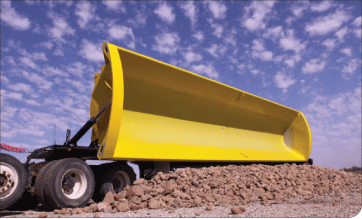 End dumps typically have higher sides and thus carry more cubic yardage, but not necessarily more weight. They’re often made of aluminum to maximize payload. Some, though, are made of AR400 heavy-duty abrasion-resistant steel typically seen in side dumps.

End dumps have a reputation for a lack of stability when sitting on unlevel ground, and the front of the bed lifts skyward to unload material, risks that can increase insurance premiums.

Newer types of end dumps, however, can be spec’d with a “live bed” – a conveyor belt that moves the load out of the gate without requiring elevation. Henderson Products takes that process even further with its BlackBelt system, which is wider – 54 inches instead of the standard 36 inches – and thus not limited to finer-grain material. To ensure long life in handling a wide variety of materials, the system’s Load Sense Belt Tensioning also tightens the belt to match the load it’s moving, releasing the tension once complete.

“There’s a lot of variation in end dumps,” says Brian Evans, Henderson marketing manager. “We feel that gives us the best of both worlds.” Evans cites the system’s ability to dump only a portion of the load at a time and handle stickier materials such as snow, asphalt and bottom ash. 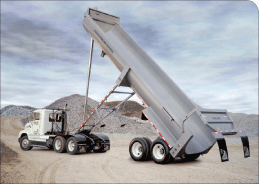 TrailKing end dumps are more likely to be found in the East, especially in confined spaces or for stockpiling aggregates in bunkers.

Clement Industries doesn’t offer a live-bottom system, but it’s in the works, says spokesman Bill Garrison. Clement deals with tip-over risk with a stability control system. “It only adds about $1,000 to $1,500 to the overall price,” Garrison says.

Side dumps have their advantages, yet there’s a regional aspect to their use. “They are found mostly in the Midwest and West,” says Dean Badinger, TrailKing product support manager. “End dumps are more traditional back East, especially in confined spaces or for stockpiling aggregates in bunkers.”

Gary Kuehnast, territorial sales manager for Jet Co., says because of enhanced maneuverability, “end dumps are used for hauling into a pit or hopper. And in the West, side dumps are for building roads and other types of construction and at oil fields” in places like North Dakota.

Side dumps can lay a row of aggregate – even over a Jersey barrier – without having to blade it, while traditional end dumps will leave a large pile all in one place, which then has to be repositioned – unless equipped with a live bottom, which allows partial unloading, Evans says.

Regional weight regulations also can influence trailer choice, says Rick Lawrence, sales manager for side-dump manufacturer SmithCo. “A lot of Eastern states have weight laws that don’t follow the Federal [gross weight] Bridge Formula,” Lawrence says. That means contractors in the East can’t run doubles like they do out West, so they need the larger payload capacity seen in most single end-dump trailers.

In terms of capacity, Kuehnast acknowledges the limitations of a side dump. Given its higher sides, a 36-foot end dump can carry as much as 36 cubic yards, while Jet’s same length of side dump typically handles only 23. Side dumps, however, bring better stability, stronger construction and reduced cost when compared with aluminum end dumps.

You also can make up for the smaller payload in overall length, says Lawrence. SmithCo offers side dumps up to 53 feet in length, and shorter models can be run in trains in states where permitted. The company’s side dump also uses abrasion-resistant AR400 steel for the tub and T1 steel for the I-beam frame, resulting in a trailer that’s up to 2,000 pounds lighter than its previous designs.

Jet’s side-dump design also has patented features, such as trunnion-mounted cylinders. This setup lifts from the bottom, allowing for a reduced 58-degree angle off vertical for better stability and a geometric advantage. Other benefits of the Jet configuration include reduced rocking when unloading, along with external tub supports, so there’s no need for a divider, enabling it to handle poles, trees and other elongated material.

“Side dumps are better for excavation and handling rip-rap and boulders,” Badinger says, as boulders can dent aluminum trailers.

Lawrence says there’s no limitation to the uses of side dumps. SmithCo has “a side dump for every application,” he says, and their dumps also are watertight.