There was lots of talk in 2012 about liquefied natural gas in trucking, but 2013 may be the year it takes off

In 2012, the emergence of natural gas in trucking operations garnered a lot of attention at tradeshows and industry events and grabbed a lot of headlines in Commercial Carrier Journal and other industry publications. But much of the conversation was explorative talk. In the case of liquefied natural gas (LNG), the bulk of real-world applications still centered around port operations in California and the oil and gas industry in Texas and Oklahoma, while compressed natural gas (CNG) operations sporadically began appearing across the country.

Much of the debate in 2012 has centered around whether LNG or CNG would be the fuel of choice for Class 8 fleets. C.R. England, Dillon Transport and Southern Counties Express – the latter of which has been using natural gas trucks for several years – have focused on LNG, while fleets like Paper Transport, Saddle Creek Logistics and Premier Transportation have concentrated on CNG.

As the dust settles, it’s all but certain that CNG is best-suited for regional, short-haul and return-to-base applications with a centrally located CNG fueling station. LNG, meanwhile, is showing greater promise for over-the-road trucking operations, with shorter fill times and less fuel storage requirements compared to CNG. But there is one large hurdle an LNG trucking operation has to overcome – availability of fuel hundreds of miles away from home.

When the year began, you could just about count on one hand the number of LNG fueling stations that were ready to serve the market. By year’s end, however, there will be nearly 100 LNG stations across the nation as infrastructure continues to roll out, led primarily by players like Clean Energy and Pilot Flying J and the resulting “America’s Natural Gas Highway” initiative. As was announced in June, Shell and TravelCenters of America’s intent to invest in $300 million worth of LNG fueling stations promises to add 100 LNG fueling sites at TA and Petro locations in the near future. Clean Energy also will continue deployment of LNG stations in 2013 and beyond, and the company recently announced a collaboration with General Electric to deploy two natural gas liquefaction plants in the Northeast and Midwest capable of producing 150,000 diesel gallon equivalents of LNG per day, bringing the fuel closer to potential markets. 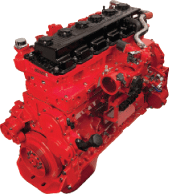 The Cummins Westport ISX12 G, an 11.9-liter natural gas engine available in early 2013, could provide a boost for adoption of natural gas-powered tractors next year.

With a roughly 30 percent cost advantage over diesel, LNG is set up for a big year in 2013 in over-the-road trucking operations, especially if diesel prices hover around historically high levels reached this year. If the early sellout for the American Trucking Associations’ Natural Gas Summit last month is any indication, larger fleets certainly are beginning to sit up and take notice.

CCJ has created a white paper to explore the myths that have cropped up since natural gas arrived on the scene. Go to www.ccjdigital.com to download “Making the case for LNG in Class 8 over-the-road trucking.”