The good news is that for-hire truck tonnage was up in February and has now risen in four straight months for the first time in more than two years. The not-so-great news is that January tonnage wasn’t nearly as strong as initially thought. 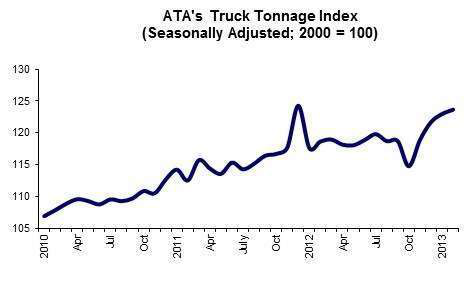 The American Trucking Associations’ advanced seasonally adjusted For-Hire Truck Tonnage Index was up 0.6 percent in February from January to 123.6. That follows a 1 percent increase in January from December to 123.0 — revised down from a 2.4 percent increase that ATA originally reported last month. Over the last four months, tonnage has increased 7.7 percent. Year over year, tonnage was up 4.2 percent in February and 4.6 percent in January. The 4.4 percent year-to-date increase is nearly double the 2.3 percent growth in all of 2012.

The not seasonally adjusted index — the change in tonnage actually hauled by the fleets before any seasonal adjustment — was 113.5 in February, down 5.5 percent from January. The base year for the index is 2000.

“Fitting with several other key economic indicators, truck tonnage is up earlier than we anticipated this year, said ATA Chief Economist Bob Costello. “While I think this is a good sign for the industry and the economy, I’m still concerned that freight tonnage will slow in the months ahead as the federal government sequester continues and households finish spending their tax returns. A little longer term, I think the economy and the industry are poised for a more robust recovery.”

ATA’s tonnage index appears to correlate with the findings of the February Randall-Reilly MarketPulse survey of for-hire trucking executives, which indicated slightly better business conditions in February than in January.