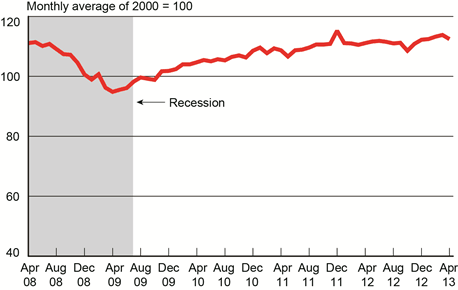 The amount of freight carried by the for-hire trucking industry fell in April from March, according to data released this week by the U.S. Department of Transportation’s Bureau of Transportation Statistics, which measures freight shipments each month with the Freight Transportation Services Index. The drop comes after five consecutive months of increases.

The index measures month-to-month changes in freight shipments measured in tons and ton-miles, which combine to form the index.

Among all modes of transportation, trucking was the only stable one, as water, pipeline shipments and rail intermodel saw declines. BTS says that although April saw a drop, the index has consistently remained above the 2012 range for four months in a row.