The Department of Labor has ordered a Cherry Hill, N.J.-based trucking company to pay one of its former drivers $276,000 in back wages and damages after the carrier fired the truck operator for refusing to deliver a load due to concerns of violating hours of service regulations, according to the DOL’s Occupational Health and Safety Administration.

NFI Interactive (No. 32 in the CCJ Top 250) was found to have violated federal anti-retaliation provisions set by the federal Surface Transportation Assistance Act for firing the trucker in 2012, according to an announcement issued by OSHA this week.

Both NFI and the trucker have 30 days to file an appeal of the order.

NFI fired the driver in August of 2012, the day after he refused to take a load of bottled water to its original destination. OSHA says severe weather, flooded roads, traffic and crashes caused the trip to take much longer than anticipated. The driver “believed he lacked sufficient time to complete the deliver and return home without violating hours of service restrictions,” according to an OSHA press release.

The driver then opted to deliver the load to a closer customer facility, against his carrier’s wishes. The carrier then arranged a second driver to pick up the load of water and deliver it to its nearby final destination.

The driver was fired the next day, OSHA says. He then filed a complaint with the DOL, prompting OSHA’s investigation. OSHA found the carrier wrongfully retaliated against the driver.

The DOL has ordered the carrier to pay the driver $126,870 in back wages and interest, $50,000 in damages for pain and suffering, $100,000 in punitive damages and attorney fees. The carrier has also been ordered to reinstate the driver.

NFI has the option to appeal the OSHA order and take the case to court. 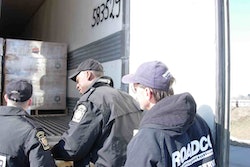