As the safety and risk manager of Cypress Truck Lines, Matt Penland has a way to assess more than 80 types of driving skills, instantly.

It all started five years ago when the Jacksonville, Fla.-based company began looking at video-based safety systems.

“I was leery of them at first,” he says. “I didn’t want to have cameras in our trucks.”

The company postponed that decision and tried using the information from its telematics and mobile fleet management system. Assessing driver safety proved difficult, he says. The volume of information was more than one person, or even a team of people, could handle.

“We are truckers trying to deliver freight. We do not have a ton of time to spend dissecting data,” he says.

The information managers received also lacked clarity and context. When the system sent an alert for a risky behavior such as a “hard braking” incident, holding drivers accountable was an elusive job.

“Yeah, I remember that,” a driver might say when contacted by management about the incident. “A dog ran out in front of me.”

In 2014, Cypress Truck Lines, a family-owned and operated flatbed hauler, began to outfit its fleet with SmartDrive technology that combines video with telematics data.

The platform uses a recording device in the vehicle to capture video and event data when triggered by risky driving behaviors. The data is sent to servers in the cloud where applications use data science to calculate numerical values for the observed rate of risk for every driver in the fleet.

The numerical values are SmartDrive Safety Scores, and they give Penland a way to assess driver performance on 80 individual behaviors that include speeding, following distance, texting while driving, seatbelt compliance, aggressive maneuvers, and more.

The scores are normalized by hours and miles driven. The higher the SmartDrive Safety Scores, the higher the risk of collision, explains Melissa Purcell, SmartDrive’s senior vice president of marketing and customer success.

Fleets use scores and video clips to coach drivers on specific behaviors and then monitor the results. Because the SmartDrive scores are calculated on a rolling, four-week average, if a driver stops a risky behavior, like speeding, the score will reflect the improvement within a month, she says.

Fleets can modify the scoring to match any specific policies they might have. As an example, Purcell says fuel haulers would consider smoking to be a high-risk driver behavior whereas dry van carriers may not.

Eyes on the prize

On January 1, Cypress Truck Lines rolled out a quarterly cash incentive program for drivers. The program uses a scorecard that includes the SmartDrive Safety Score, metrics for fuel efficiency and other performance data captured by SmartDrive.

One of the metrics shows the percentage of coaching events drivers have completed. When drivers have an event for running a stop sign, or any other reason, this metric gives them an extra incentive to contact management and complete a coaching session.

Drivers can login to the fleet’s SmartDrive portal to see coaching events they have not yet completed, Penland says.

The bonus is attainable for all drivers, he says, but projections show that approximately 50 percent of drivers will likely hit the targets they need to qualify for the bonus in the first quarter of 2018.

Cypress Truck Lines uses advanced technology to manage driver performance, but Penland says the simple explanation he gives to drivers is that scoring their behaviors and coaching with video is no different than what sports teams do for professional athletes.

“We are professional truck drivers. That’s what the culture has got to be,” he says. 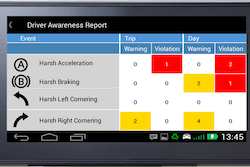 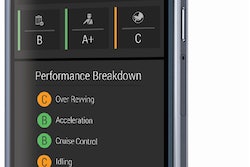