Editor’s note: This is the first of three articles looking at the Commercial Carrier Journal Economic Outlook Survey, which includes responses from 431 fleet representatives about their top concerns and outlook for 2018.

What company expense will increase the most in 2018?

Hours after being sworn in as President of the United States on Jan. 20, 2017, Donald Trump directed Chief of Staff Reince Priebus to issue a two-page memorandum to the heads of executive departments and agencies to freeze any regulations not yet published in the Federal Register pending further review.

Priebus’ memo, and subsequent Executive Order 13771 by the Trump administration requiring agencies to eliminate two existing regulations for each new significant regulation, brought the rulemaking process to a grinding halt.

The Office of Management and Budget reviewed 666 rulemakings in President Obama’s last year in office compared to just 192 in Trump’s first year. OMB reviews of U.S. Department of Transportation-issued rulemakings dropped from 48 to 16. The annual number of pages in the Federal Register, a reflection of overall regulatory activity for which the Obama administration set records in six of eight years, dropped from 95,894 pages in 2016 to 61,950 in 2017 during Trump’s first year in office — the lowest in 25 years.

What is your biggest concern?

After enduring an unprecedented rate of regulatory proposals and final rules by DOT and the Federal Motor Carrier Safety Administration, trucking companies have been able to breathe a collective sigh of relief under Trump. But the regulatory environment remains a concern for fleet executives in 2018, with 12.1 percent of respondents in the 2018 Commercial Carrier Journal Economic Outlook Survey (see “About the survey,” page 60) forecasting regulations will be their top challenge this year.

But when breaking down that 12.1 percent who list regulations as their top challenge by fleet size, another story emerges. Of survey respondents from fleets with 10 to 100 power units, 16.2 percent cite regulations as a top challenge in 2018, compared to only 7.1 percent of respondents from fleets with more than 100 power units.

Much of the current regulatory concerns – particularly among respondents from smaller fleets – likely center around the new electronic logging device mandate that took effect last December and the ongoing enforcement rollout.
According to a November 2017 survey of 1,982 carriers by carrier-sourcing firm CarrierLists, only 40 percent of fleets with 100 or fewer trucks had adopted ELDs – just six weeks before the deadline – while almost all the larger fleets in the survey already were ELD-compliant.

CarrierLists’ follow-up survey in December 2017 showed the adoption rate among smaller fleets had increased to 75 percent ahead of compliance. But as early adopters can attest, ELD implementation and compliance often carries a steep and prolonged learning curve and can hurt productivity for two years or more.

Productivity losses related to the ELD mandate, in addition to a strong freight environment, have contributed to tightened capacity and helped create one of the strongest rate environments in years, said Jonathan Starks, chief operating officer at industry analysis firm FTR.

“It’s no surprise to the industry that the end of 2017 and the beginning of 2018 have been good for carriers,” said Starks. “In terms of the overall economy and freight demand, we are looking at strong potential for further upside possibilities for carriers.”

The capacity crunch also is evident in the spot market. In January 2018, spot market loads grew to record levels with a 134 percent gain compared to January 2017, according to DAT Solutions. Meanwhile, capacity declined 6.9 percent compared to the same month last year. Monthly rates in the van, refrigerated and flatbed spot markets all logged significant year-over-year increases, up 35 percent, 24 percent and 36 percent, respectively. 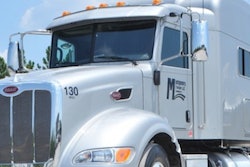