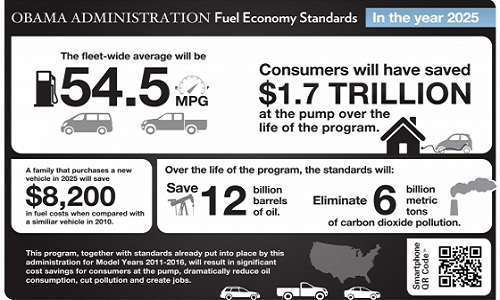 The Obama administration on Tuesday, Aug. 28, finalized standards that will increase fuel economy to the equivalent of 54.5 mpg for cars and light-duty trucks by model year 2025. When combined with previous recent standards, Tuesday’s move nearly will double the fuel efficiency of those vehicles compared to new vehicles currently on our roads. The administration said its national program to improve fuel economy and reduce greenhouse gas emissions will save consumers more than $1.7 trillion at the gas pump and reduce U.S. oil consumption by 12 billion barrels.

“These fuel standards represent the single most important step we’ve ever taken to reduce our dependence on foreign oil,” said President Obama. “This historic agreement builds on the progress we’ve already made to save families money at the pump and cut our oil consumption. By the middle of the next decade, our cars will get nearly 55 miles per gallon, almost double what they get today. It’ll strengthen our nation’s energy security, it’s good for middle-class families, and it will help create an economy built to last.”

The standards issued by the U.S. Department of Transportation and the U.S. Environmental Protection Agency build on the administration’s standards for cars and light trucks for model years 2011-2016; those standards raised average fuel efficiency by 2016 to the equivalent of 35.5 mpg. The agencies believe that achieving the new fuel efficiency standards will encourage innovation and investment in advanced technologies that increase U.S. economic competitiveness and support domestic jobs in the auto industry.

The final standards were developed by the National Highway Traffic Safety Administration and EPA following engagement with automakers, the United Auto Workers, consumer groups, environmental and energy experts, states and the public. Last year, 13 major automakers, which together account for more than 90 percent of all vehicles sold in the United States, announced their support for the new standards.

The administration said that by aligning federal and state requirements and providing manufacturers with long-term regulatory certainty and compliance flexibility, the standards encourage investments in clean innovative technologies that will benefit families, promote U.S. leadership in the automotive sector and curb pollution.

“Simply put, this groundbreaking program will result in vehicles that use less gas, travel farther and provide more efficiency for consumers than ever before – all while protecting the air we breathe and giving automakers the regulatory certainty to build the cars of the future here in America,” said U.S. Transportation Secretary Ray LaHood. “Today, automakers are seeing their more fuel-efficient vehicles climb in sales, while families already saving money under the administration’s first fuel economy efforts will save even more in the future, making this announcement a victory for everyone.”

“The fuel efficiency standards the administration finalized today are another example of how we protect the environment and strengthen the economy at the same time,” said EPA Administrator Lisa Jackson. “Innovation and economic growth are already reinvigorating the auto industry and the thousands of businesses that supply automakers as they create and produce the efficient vehicles of tomorrow. Clean, efficient vehicles are also cutting pollution and saving drivers money at the pump.”

The administration said its combined efforts represent the first meaningful update to fuel efficiency standards in decades and will result in an average fuel savings of more than $8,000 by 2025 over the lifetime of the vehicle; for families purchasing a model year 2025 vehicle, the net savings will be comparable to lowering the price of gasoline by about $1 per gallon and reduce oil consumption by more than 2 million barrels a day by 2025 – as much as half of the oil imported from OPEC each day.

The standards also target reduced carbon pollution and address climate change. The administration said the combined standards will cut greenhouse gas emissions from cars and light trucks in half by 2025, reducing emissions by 6 billion metric tons over the life of the program – more than the total amount of carbon dioxide emitted by the United States in 2010.

In achieving the new standards, EPA and NHTSA expect automakers to use a range of efficient and advanced technologies to transform the vehicle fleet. The administration said the standards provide for a midterm evaluation to allow the agencies to review their effectiveness and make any needed adjustments and that major auto manufacturers already are developing advanced technologies that can reduce fuel use and greenhouse gas emissions beyond the existing model year 2012-2016 standards.