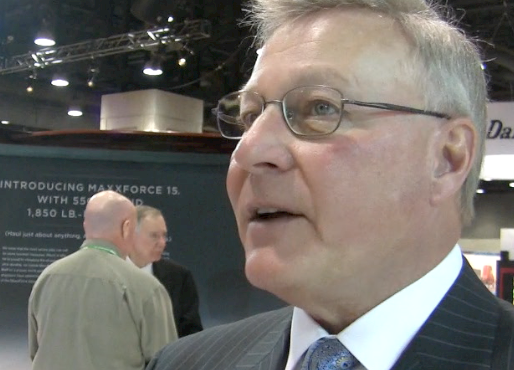 Navistar on Monday, Oct. 8, announced the retirement of James L. Hebe, senior vice president of North America truck sales for the company. Hebe, 63, has held the position since rejoining the company in 2008.

“Jim Hebe has been a significant figure in our industry for four decades,” said Jack Allen, president, Navistar North America Truck & Parts. “We have benefited greatly from his many contributions, perhaps none more important than Jim’s passion for developing deep customer relationships, which has become embedded within Navistar’s sales and marketing team. We thank him for his service and wish him the best in retirement.”

Hebe began his career at International Harvester (Navistar’s predecessor) in 1971 as a management trainee in Boston. He later became a heavy truck salesman for International Trucks. After leaving the company, Hebe held leadership roles with American LaFrance, Kenworth Truck Co. and Kenworth of Tampa. In 1992, he was named chairman, president and chief executive officer of Freightliner.

After leaving Freightliner in 2001, Hebe became head of Seagrave Fire Apparatus in Clintonville, Wis. He returned to the trucking industry in 2006 when he became dealer principal of Co-Van/Cascadia International, before rejoining Navistar two years later in his current role.

Among Hebe’s numerous industry accomplishments is the Distinguished Service Citation from the Automotive Hall of Fame in 1995, one of the few trucking industry executives to earn this distinction; and being named an Automotive News All-Star.

Navistar also announced that Vincent Intrieri and Mark Rachesky have been appointed to its 10-member board of directors. Both have ties to Carl Icahn, one of the company’s largest shareholders. They replace Eugenio Clariond and Steven Klinger, who are retiring.