Manuliak has been a driver for 24 years — including 14 with Bison — and clocked more than 3 million safe miles. Throughout his career, Manuliak has always focused on safety, both as a driver and a trainer.

Accepting his award, he said, “If I had to name one factor that’s brought me to today’s achievement, it’s certainly safety. As professional drivers, we have a responsibility to be sure we are keeping ourselves and people around us on the road safe. I keep safety in the forefront of everything I do. I drive safe. I teach safety to new Bison drivers. Safety is at the foundation of my success.”

Buchs, 62, of Colfax, Illinois, has driven 2.3 million accident-free miles in his 27-year driving career. He learned to drive trucks on the farm where he grew up. In the late 1980s, he began hauling regionally around St. Louis for Roadway and spot-driving for farms. Later, Buchs drove for Nu-Way Transportation. In 2003, he leased to Landstar.

In accepting his award, Buchs thanked his parents, who are deceased, for teaching him and his siblings “a tremendous work ethic on the dairy farm — to have a caring attitude about life, to care for livestock and the value of life.”

Citing a recently published story on Overdrive that highlighted his emphasis on people, Buchs said, “Technology’s great, but it doesn’t feel, it doesn’t care. People are what matters.” 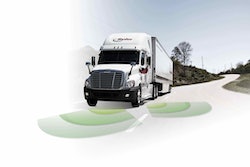 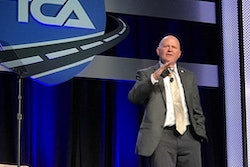 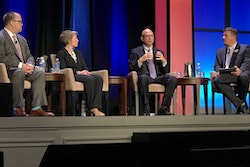