How the two basic types of ELDs operate 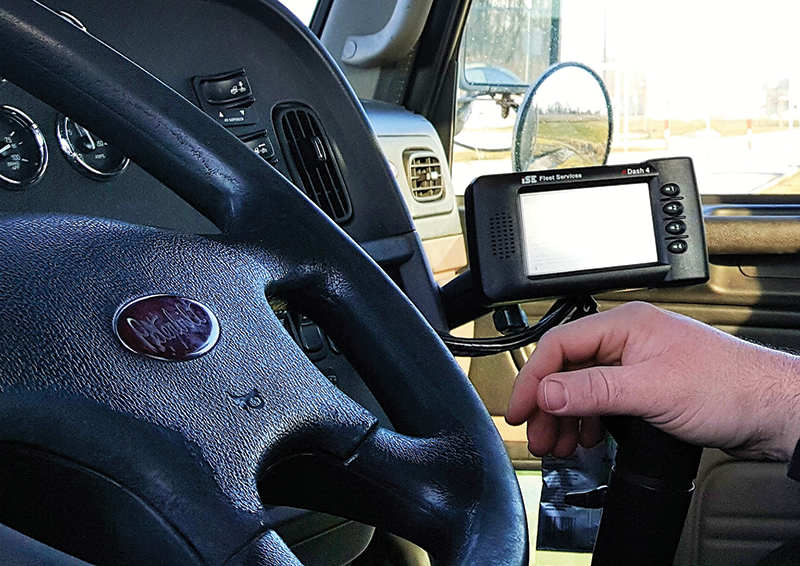 ISE Fleet Services’ eFleetSuite baseline compliance device is a dedicated unit with its own cellular data connection but without a lot of extra functionality beyond logs.

All compliant electronic logging devices will share a common bond: They can record data coming in from the system that controls the truck’s engine and component parts. The final rule from the Federal Motor Carrier Safety Administration was specific in requiring synchronization with the electronic control module. That’s one of the reasons the agency didn’t require ELDs in trucks with model-year 1999 or older engines.

The rule requires ELDs to automatically record date, time, location information, engine hours, vehicle miles and identification information for the driver, carrier and vehicle itself. Unless the driver is enabled for use of the vehicle in a “personal conveyance” mode outside of work hours, ELDs are required to record all of those elements “when the driver indicates a change of duty status or a change to a special driving category” such as a yard move, the rule states.

When in motion, ELDs are required to record all of the information on an hourly basis at a minimum. Many ELDs are offered as part of systems built for detailed tracking purposes, useful to fleets and owner-operators for purposes such as automatic notification of arrival times.

Those systems are capable of recording in a much more refined manner, and some may default to that. Providers may or may not have the ability to adjust the refinement.

Though there are plenty of variations, two types of ELDs have emerged:

In dedicated unit configurations, the device is supplied by the provider and is likely to remain in the truck.

BYOD (“bring your own device”) systems allow buyers to purchase their own hardware for the driver interface, such as an owner-operator using an app on a personal Android- or iOS-powered smartphone. A carrier may seek out a deal on tablets to dedicate to its power units and drivers. 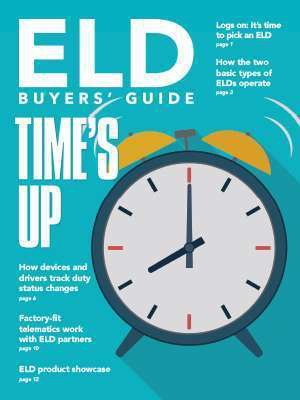 Click here to download the full version of the CCJ ELD Buyers’ Guide, updated with how your business can choose an ELD for your business.

Most older forms of electronic logging devices, known as electronic onboard recorders (EOBRs) or automatic onboard recording devices (AOBRDs), have been the dedicated-unit type. Two examples that have been available for years are Omnitracs’ MCP series and PeopleNet’s current products used by many drivers employed by or leased to larger carriers.

Many of these units provide ELD functionality in a single device package tied directly to the ECM by a cable and plug.

Like mobile phones, such units use connections to the cellular network and GPS functionality to deliver on the ELD rule’s requirements for recording location, mileage and engine hours. Data storage occurs using a combination of the internet cloud, back-office servers and the device itself.

A notable exception among devices available for years now exists in the base model of the Continental VDO RoadLog, which is limited to hours-of-service recording and inspection-report functionality.

With no connection to the cellular network with the device, fleets and owner-operators manage data storage via a USB-connected drive to transfer records to a laptop or other computer.

Other dedicated devices may pair two pieces of hardware, bridging the gap between the traditional single-unit EOBR and the two-piece BYOD systems readily available today.

In most cases, those devices are in evidence when a BYOD and a dedicated version exist from one manufacturer.

While the J.J. Keller Encompass and Rand McNally HD100 systems both are BYOD-capable, they also are offered with company-branded Android tablets that come preloaded with software: the Compliance Tablet from J.J. Keller and the TND from Rand McNally.

Any fleet or owner-operator willing to make the investment in dedicated tablets can turn a BYOD system into a dedicated one.

Jack Schwalbach, who manages the private fleet of Reinders, a Wisconsin-based turf and irrigation products company, moved all of his trucks’ tablets to ELD functionality by signing on with Geotab’s program for leasing engine-connection hardware to pair to tablets.

“We have dedicated tablets,” Schwalbach says. “The tablets are used just for logging – the data plan, we have locked down. Everybody’s got their smartphone on their own, so they use that” for anything else.

Bring your own device

The “bring your own device” phrase and its BYOD acronym came into use with the profusion of smartphones over the past decade. In trucking, it’s a common term to describe a major part of today’s ELD market.

Dozens of providers offer their own BYOD systems. A BYOD-configured ELD consists of a “dongle” that connects to the ECM via the cab’s onboard diagnostics port. The dongle typically pairs via a Bluetooth connection with a smartphone or tablet to transmit data.

Software from the ELD vendor on your smartphone or tablet enables you to change duty status manually when you stop. When your vehicle goes into motion, the ELD automatically will shift to the drive line in the logbook.

Variations exist. The engine-connection dongle may or may not have a cellular connection. In the case of the KeepTruckin ELD, the ECM-connected device maintains a GPS connection but no cellular connectivity itself. For that, the system relies on the connected smartphone or tablet and its data plan.

Meanwhile, Geotab’s Go — also a BYOD solution (and marketed as the Transflo ELD T7 by Pegasus TransTech) — maintains its own cellular connection and is capable of being updated and troubleshot over the air if software/firmware updates are needed.

How the two basic types of ELDs operate »