CCJ profiles a fleet each month for deploying – and in many cases, developing – innovative strategies and/or technologies that improves the operation of their business in some area (or areas); be it in recruitment and retention, maintenance, back office technologies and anything (and everything) in between.

CCJ Innovators profiles carriers and fleets that have found innovative ways to overcome trucking’s challenges. If you know a carrier that has displayed innovation, contact CCJ Chief Editor Jason Cannon at jasoncannon@randallreilly.com or 800-633-5953. The CCJ Innovators program is sponsored by Comdata, Freightliner Trucks, Omnitracs and Valvoline.

aifleet bills itself as "a tech-first carrier, rebuilding trucking from the ground up" with advanced technologies and data science routing. Based in Austin, Texas, the 40-truck dry van truckload carrier launched last year taking aim at inefficiencies in the trucking sector, where driver utilization is below 50% and driver turnover is more than 90%.

The muscle behind aifleet is a proprietary algorithm that's at the center of all the carrier's operations seeking to eliminate "as much dwell that we can on a driver's journey end-to-end, from home-to-home," said aifleet Founder and CEO Marc El Khoury said. "We need technology and a business model that is obsessed with driver happiness. And so, right now, our technology is very driver-centric. It adjusts based on driver preferences as well. You know, not all drivers want to haul the same kind of freight. Not all drivers want to go to the same cities that other drivers want. So this is what our technology does. It's very focused on our drivers and we'll continue to learn as we hopefully continue developing it and continue investing it."

Behind every good diversity and inclusion program is a good bot — or at least that’s some of the story at U.S. Xpress (CCJ Top 250, No. 19), which is enjoying a rise in its Spanish speaking driver population thanks in part to an algorithm dedicated to reaching applicants whose primary language is not English.

As a valuable part of the company’s English as a second language program (ESL), the chat bot has so far racked up more than 500,000 interactions and 20,000-plus inquiries since the program kicked off late last summer.

Bitcoin and various cryptocurrency kin like Ethereum or Dogecoin might be the most widely known digital currencies, but one of the more trendy quasi-monetary devices is the non-fungible token (NFT).

Hoping to cash in on the trend, 205-truck van and end dump trucking carrier Woody Bogler Trucking is leaping into the metaverse, releasing what is likely the first NFT collection in the trucking industry.

"You can think of an NFT as a deed or a token," said Woody Bogler President and CEO Tracy Bogler, adding that NFTs have been a blooming personal interest. "Owning an NFT really provides a sense of belonging to a community, and we thought it would be interesting to create a collection and then offer ownership to our drivers."

GP Transco's (No. 177) OpenRoad TMS first hit the road five years ago and has since yielded an impressive ROI of roughly 480% for the dry van carrier while improving driver retention and building trust among customers.

Sergey Bort, GP Transco’s vice president of marketing and strategic business development, said the company saves roughly 1.7% per every dollar of revenue due to OpenRoad TMS.

The omniscient feature keeps all interested parties updated on truck location without having to regularly pick up the phone. That’s a nice touch for all concerned, especially drivers.

Illinois-based Roadrunner (No. 100) has made significant changes in its operations to improve its reputation and efficiencies with new leadership, a new network and new technologies, resulting in greater capacity and reduced transit times.

The 38-year-old company, which experienced a setback in 2017 following an accounting scandal, has rebuilt itself from nearly the ground up.

Time is money, but miles have long been the preferred unit of measurement when it comes to charging shippers and paying drivers. That can be problematic for shrinking lengths of haul and an industry that's fraught with delays like traffic snarls and shipper/receiver detention – losses in productivity that don't provide fleets with a lot of incentive to convert to an hourly pay structure.

Roehl Transport (No. 60) this year blended the best of both worlds, offering its national, regional and home daily fleet drivers a mileage band pay plan featuring rates per mile based on the length of haul with added activity pay.

Even though the company has a per-hour rate benchmark that it's seeking to provide the driver, Norlin said not going to a full per-hour pay model leaves productivity incentives in-play.

FreightWorks, a 100-plus truck, hazmat, high-security and temperature-controlled freight hauler based in Rutherfordton, N.C., debuted a podcast in September 2021 – just one more podcast trying to stand out in an ocean of more than 2 million worldwide.

The bi-weekly series podcasts are purposely absent of recruiting pitches that tout FreightWorks' home time and driver pay, rather its focus is on news and events that affect the industry as a whole, telling the stories of the men and women who keep it moving, and the people trucking touches along the way.

"The supply chain stories that became national news only reinforced what people in the industry have known for a long time,"  said Butch Maltby FreightWorks communications director and host of Life by the Mile, "which is a penetrating look into the obvious – our economy is so dependent on people suiting up and showing up every day and getting in the truck and 24/7 traversing the ribbon arteries of highway."

Driver one, starting in Oregon, will bring a Central California-bound load from Oregon to Northern California. A second driver arrives from Central California with an Oregon-bound load. The two drivers will swap trailers halfway and return to where they started so the loads can carry on to their final destination. That’s how truckload carrier Rollzi operates.

"The strategy and the technology go hand in hand; you can't have the strategy without the tech, and the tech is not as valuable without the strategy,” Rollzi Co-founder and CEO Damien Hutchins said. “I get this question a lot where they ask, ‘What tool would you buy to be a tech forward trucking company?’ I think what's missing in that question is, ‘What is the strategy you're going to marry to it?”

Charlie Deull, part of the family that owns and operates the Broadway show-related freight carrier Clark Transfer, experienced the COVID-19 pandemic as an existential business threat. He watched as, quite literally overnight, the entirety of the touring-theater business came an abrupt halt, sidelining a then around 100-unit fleet made up entirely of leased owner-operators.

When Broadway began to return in earnest the fleet was essentially half its pre-pandemic size, and efforts to recruit were stymied by a mixture of a booming spot market and the reality that Clark’s business, though above-average in owner-op compensation, is below average when it comes to home time and other creature comforts given the touring nature of its freight.

The company did not want to shift to a powered-equipment-purchasing operation and hire company drivers, as “we for years have believed that the people who made this all happen are amazing owner-operators,” Deull said. Clark, rather, adjusted its leased-owner compensation structure to provide a backstop it believed would add a measure of income security that would be particularly attractive to business owners whose memory of the pandemic was fresh.

Carriers for years have developed or sought out platforms that ease the process of load quoting and booking for their customers, but the complexities and requirements that come with hauling bulk made automating that process problematic.

Schneider (No. 9), one of just a few large carriers with bulk capacity – which it has offered for more than 50 years – launched in August a first-of-its-kind digital marketplace and extending 24/7 visibility to bulk shippers.

Launched in 2020, Schneider's FreightPower marketplace leverages the strength of the company's pool of more than 11,000 trucks and 37,000 trailers to offer shippers access to capacity. To extend digital marketplace capabilities to its bulk customers, Schneider expanded its FreightPower technology and added "a few more steps that a shipper has to take, and a few more questions that they have to answer – or let's say boxes they have to check" said Schneider Senior Vice President of Bulk Jason Howe.

The infamous congestion that began last year at the ports of Los Angeles and Long Beach laid bare the supply chain inefficiencies and system-wide turmoil that exist throughout the nation’s marine and inland terminal network.

Peel piles can greatly improve productivity for drayage operations. According to Mason George, IMC Companies’ (No. 59) president of national accounts, peel piles can reduce driver detention by three times and cut dwell time – the time a container sits at a port terminal – from nine days to an average of three days. A driver might make five turns instead of two at the Port of Los Angeles, and seven turns instead of three at an inland terminal like Memphis or Chicago, George said.

IMC, the nation’s largest marine drayage company and operating in nearly 50 inland and marine locations, wanted to bring the peel pile concept to more of its customers, with some added efficiencies for its 2,200 drivers. In 2020, Collierville, Tennessee-based IMC began development of a proprietary version of the peel pile concept that it now markets as SmartStacks. As containers arrive at a terminal, those for participating IMC customers are grouped into separate SmartStacks piles for priority service. Unlike a regular peel pile, in which all containers are typically hauled to a single location, containers in a SmartStacks pile could be destined for any number of inland terminal locations.

She said word-of-mouth advertising, which has consistently been one of Melton’s top 10 hiring sources, trumps all when it comes to effectively communicating a message, especially in the trucking industry as drivers meet on the road at truck stops across America. But with the pandemic limiting in-person contact, and that becoming more of the norm post pandemic, her team realized the traditional method of referrals was diminishing.

“With influencer marketing being such a popular and effective concept, it was surprising to realize much of this method of advertising had not been formally implemented in our industry’s fleets,” Ruley said. 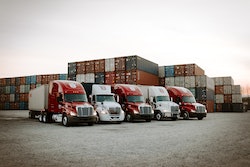