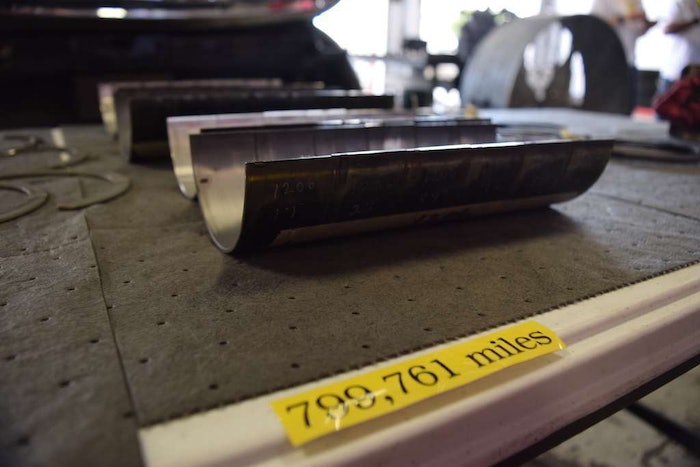 If analysis determines a fleet is a candidate for an extended interval, Shawn Whitacre, senior staff engineer at Chevron, says it’s important to build some margin into the target mileage to allow for instances where the truck can’t make it back in for service.

“You can’t just make a recommendation for 50,000 miles if the actual unit doesn’t have some ability to go beyond that, because it’s not always practical for an end user to hit that exactly on the number,” he says. “If your target is 50,000 miles but for whatever reason trucks can’t come in reliably and hit that mark, then that needs to be factored into it.”

While drain intervals depend on equipment usage and type, Stede Granger, OEM technical services manager for Shell Lubricants says most OEM-recommended oil drain intervals often have a similar margin built-in since some applications are less taxing on engine oil than others.

“When they do the extended drains, you’ve got to make sure you don’t miss them,” Granger says, “because it gets more critical.”

“If you’re draining oil at the 75,000 mile mark, can the chassis parts that require grease, for example, go that far,” Granger poses. “A lot of chassis parts can’t go that far, and there might be some DOD inspections [on that interval] and [fleets] might want to coordinate with that.”

There’s also oil filter considerations. Whitacre says in most cases approaching 100,000 miles isn’t a challenge for the filter’s ability to handle the fluid. However, the extended period mounted to the engine can cause issues.

“These things are designed to withstand a certain amount of time shaking around on an engine,” he says.

Since other systems on the truck are often serviced during oil changes, Whitacre says the overall mileage target will include various elements of a fleet’s overall maintenance program.

“The fleet doesn’t always get a lot of benefit from a small incremental increase,” he says, “because they may have other PMs to do on the vehicle at a different cycle.”

In most cases, unless a fleet can double its engine oil drain interval – or push it to where the oil is changed every other time the truck comes in for service – extending it may not make sense.

“There isn’t a one-size fits all answer to that,” Whitacre says.

“Fuel is an indicator of the work that’s done by the engine,” Granger says. “If the engine has consumed less fuel, it’s done less work and less contaminants can be found in the crankcase.”

“There’s a strong correlation between how fast the oil degrades and how hard the engine is working,” Whitacre adds, “and fuel economy is a very good indicator for that. The more fuel you burn, the faster the oil degrades.”

“For vehicles making long-distance trips, where optimum road and engine speeds can be maintained for long periods, there is generally less stress on the oil and longer drain intervals can be achieved,” he says.

For trucks out of warranty, both Granger and Whitacre recommend any transition be done in consultation with someone who understands how to interpret oil analysis data, “to make sure they’re not saving money in the short-term but compromising the integrity of their product longer-term,” Whitacre says.

On older trucks, or trucks no longer covered by a manufacturer’s warranty, Granger says an oil distributor will likely become a primary resource for helping evaluate candidates for extended oil drain intervals. However, that process will mirror the attack recommended by the OEM.

“We’re going to recommend right off the bat that they do oil analysis,” he says. “You always have to have a reference point. You’ve got to know what is happening in your crankcase.”