At the Omnitracs Outlook user conference, held Feb. 25 in Dallas, Chief Executive Ray Greer said driver workflow is the future of the transportation and logistics industry. And on Thursday, Mar. 14, the company announced the acquisition of Blue Dot Solutions to get there as quickly as possible.

Greer said Omnitracs, a fleet management systems provider, wants to automate workflow and improve the driver work experience. At the Outlook conference he shared plans to incorporate point of interest (POI) intelligence about shipper locations and integrate other relevant data points into a next-generation user interface and workflow for the upcoming Omnitracs One mobility platform.

“From our point of view, driver satisfaction and retention depends on using technology to make their lives better,” he said at the conference.

Omnitracs One is a cloud-native mobility platform that brings common features and services from Omnitracs’ fleet management products together in a single, configurable offering. The company is currently migrating all of its products, which include an enterprise in-cab platform, IVG, to the Android operating system. Its BYOD mobile platform, formerly called XRS, is already being used by fleets to deploy electronic logging and other mobility applications from Omnitracs on Android devices that connect to a mobile gateway in the vehicle.

All of Blue Dot’s 14 employees will be retained by Omnitracs as the company begins to migrate its MilesAhead workflow to the Omnitracs One’s AWS cloud-native platform, Greer said in an interview with CCJ on Tuesday, March 12, at the Truckload Carriers Association annual conference in Las Vegas. The acquisition compresses the timeframe to bring Omnitracs One to market by 18 months, he explained. The company plans to release the new platform with the MilesAhead user interface by the end of 2019. 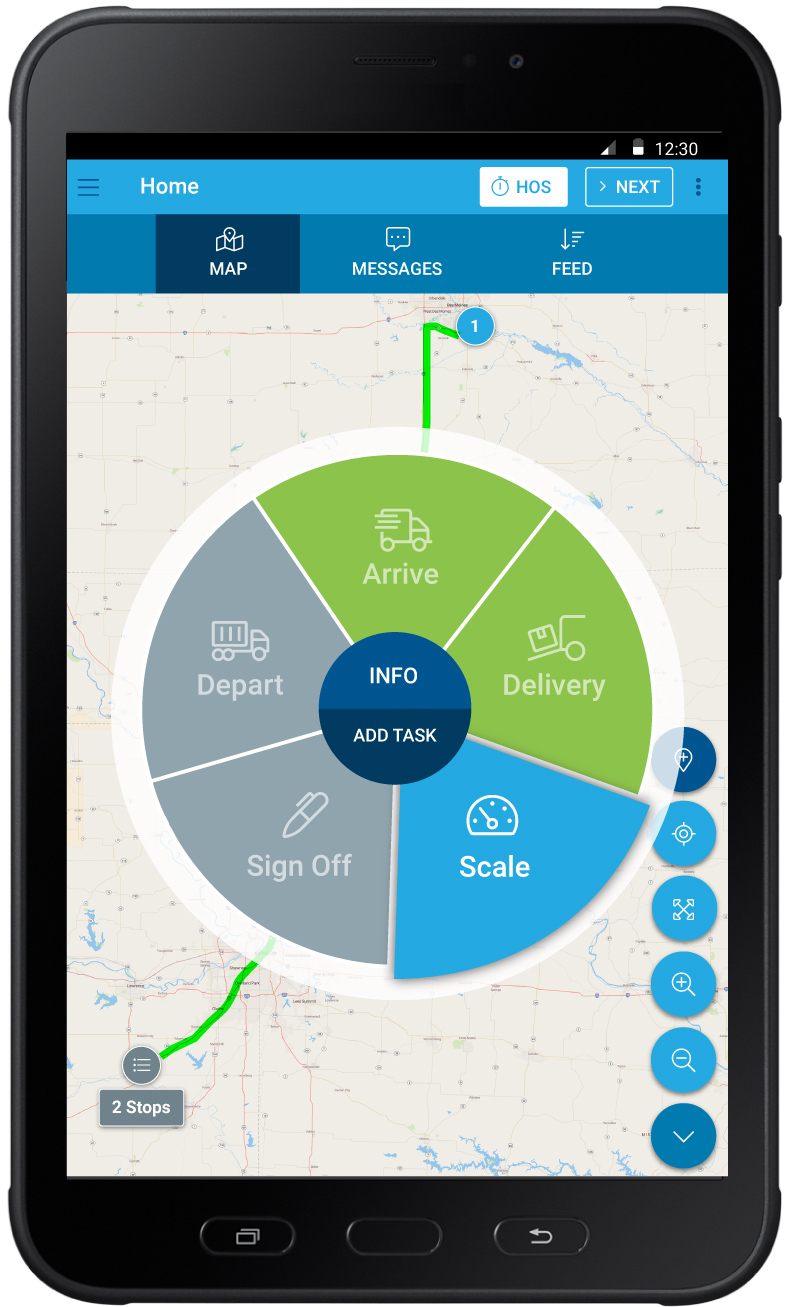 Blue Dot’s MilesAhead software will become the user interface of Omnitracs One.

In the short term, Greer said MilesAhead will not be available for use on third-party telematics platforms but that will likely change before long.

“I certainly think in this open platform environment, our applications are going to be utilized by anybody, regardless of the platform they happen to be running,” he said. “That is ultimately where we are headed.”

Among the capabilities the MilesAhead platform will bring to Omnitracs One are:

By integrating the MilesAhead platform and products into Omnitracs One, the company says that drivers of its fleet customers will have a mobile user interface that will be highly intuitive, eliminate steps and wasted time spent on reporting.

“We are unique in our approach to aggregating transportation data and insights and placing this information in the right hands, at the right time, with sufficient context – facilitating edge computing,” said Michael Sklansky, CEO of Blue Dot Solutions. “By joining forces with Omnitracs, our team is well-positioned to help accelerate innovation in the transportation technology ecosystem.”